It is no secret that in the world of Body Art, a good creation is the result of the harmonic interaction between the artist, the model, and the photographer.

Each one brings his or her own skills and resources to the piece.

The artist brings the idea, the vision, and the talent, and covers the expenses of the time, the paints, the props, and the model.

The model brings her body’s physical ability, and the sensitivity and intellect to carry the work.

The photographer brings his talent and his memorialization, processing, and editing skills to produce the final version of the creation.

One cannot exist without the other, so to whom does the creation belong? Who has ownership of the copyright?

The process that leads the creation

What many people do not know is that when a Body Art painter is invited to carry out a creation at a festival, competition, or private event, he also wears the hat of an entrepreneur.

Last year I received an invitation to paint at an exhibition in France whose theme was “French Painters”.

How do you prepare for such an invitation?

I break it down into tasks and make sure each task is carried out:

Research: What are the themes of the exhibition and the characteristics of the presentation:  It is an outdoor exhibition open to the public and the topic changes each day.

Preparation: Before public painting, I personally dislike painting intuitively without preparation for such events, therefore I prepare a trial version at home.

Selection of an idea: “Lady and Servant”, an idea that requires two models rather than one.

Models’ requirements: Able to stand during the four days of the exhibition and model Body Art. The “Lady” will be dominant, strong, and assertive. The “servant” will be distant and transparent.

Preparing props and costumes: For the “Lady” I purchased an expensive needlepoint gown that was sewn especially for the project.

Producing the painting: Purchase of paints, props, and materials.

Execution: A considerable amount of time – I paint for seven hours and prepare both models.

I check that this is what I envisioned, fix, rearrange, look again, and decide that it is lovely enough to take to France. And also good enough to capture the moment in a photograph. 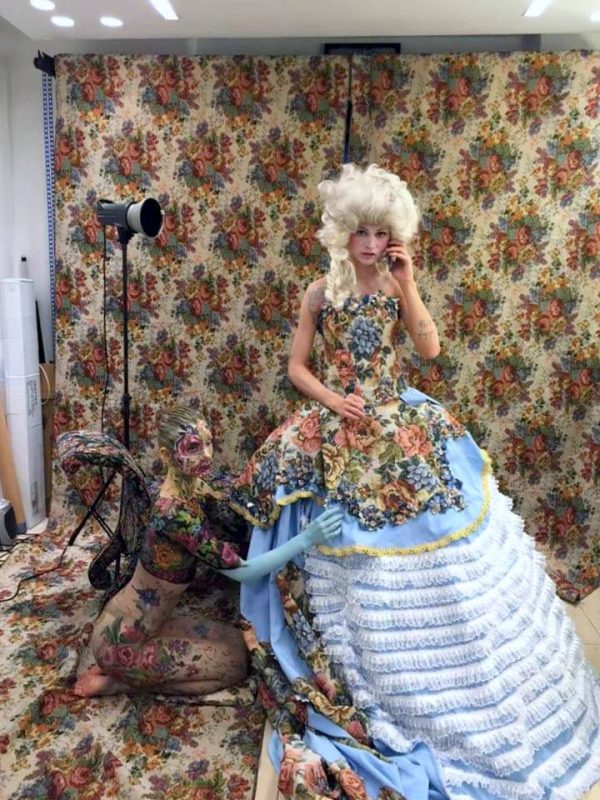 And then the photographer arrives

Again the artist in me becomes an entrepreneur and I summons a paid photographer.  The photographer comes for half an hour. The click of a button on the camera, and I will have a well-executed memento of the creation forever.

Of course I can use my own camera and take a picture, but I depend on the talent, the experience, and the technical means that the photographer has at his disposal, and I know that a photograph that he takes will be the best.  Therefore, I’m willing to pay.

The photographer takes the pictures.  Everyone is in a good mood.  I ask him to show me  the thumbnails in order to choose the ones I like best. I choose a few pictures and ask him to edit them.  This is accepted practice and not at all out of the ordinary.

I asked for the original files so I could edit them myself, since I knew exactly what I wanted. To extend the hemline of the dress a little, to fix the protruding shoulder, to complete the floor background, to clean up the light, to straighten up a strand of hair that fell down…I like things to be perfect : )

Then I got this answer from him: that the files belong to the photographer and not to me and that it is his creation and I am not alowed to make any change.

So whose creation is this?

In the end he gave me several pictures and I processed them.

Unfortunately, the exhibition was cancelled due to the wave of terrorism that plagued France at that time.

I was left with a lot of thoughts regarding to whom does the creation belong.

The photographer think that the pictures are his and that I do not have the right to exhibit them. Really?

I initiated, produced, painted, costumed, and financed the whole process and the work of all the participants.

How can it be that the rights to a picture that I have created do not belong to me?

I love working with photographers, and I will write more about that in due course, but who gets the rights to the pictures? 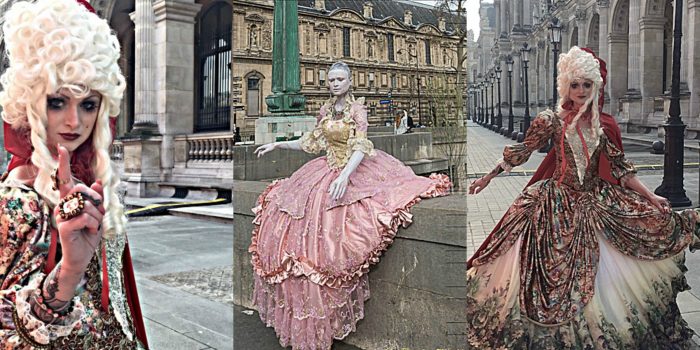 What do you say? Is a photograph of my creation a totally new work by the photographer?

I would be happy to hear from you

This unique color scheme, depicts the contrast of Carmen's character.
One side is love and the other hate.
Inspired by the opera "Carmen" by Bizet.

Interesting design, no side stitching but sexy straps instead. A zipper, for comfortable pull-on and freedom of wear. Long sleeves, and beautiful Blue lions that will flatter your shape.